A darkened room, everyone is asleep. Almost. A mother, a father, a baby, a mountain and a pillow. A feminine figure welcomes the visitors as they enter. She accompanies anyone present at the venue as well as anything that lives in it. She is the Artist’s mother. A statement, as in the exhibition title, declaring one’s opinion. The space is inhabited by this great mother’s expression. The sound a piano, violins and white noise surrounds it. Her skin stretches under wax and her face cringes in a momentary spasm. She lays as her eyes bleed in black. Her appearance floats through the gallery like some omniscient, superior character who can see everything even when not present. The treatment, both the artistic and the cosmetic, induces a calm, introverted atmosphere. The vision is blurred, cradled by the music. The cosmetician is almost massaging your face. Mom... Mom... the photographer’s voice awakens her mother as well as the spectator from the melodic sequence, from daydreaming. Her eyes open. The exhibition centerpiece is a small sculpture of a baby. Vugman returns to a piece of her own work, handcrafted in 1994. The figure of little Moses - a stuttering infant in his cradle, covered with a blanket. He lays in the center of the gallery, between his mother and father. The beams of the pedestal in which it sits protect him, elevating and separating him from the rest so that only the ones who should turn their attention to him could notice him. The others won’t. Now, he could be any spectator’s little boy. Some will identify him as a baby, and some a bodily organ of some sort. The father, post a surgical procedure, is sleeping on his side, possibly recovering, laying his head on an uncovered pillow. Turned to the camera, his back shows a long scar stemming at the base of his spine. His body sinks into the bottom of the picture. The wall is grey. There is a silent, framed moment. A certain pleasant melancholy. Further along the wall, polaroid photos are hanging like links in a chain, a horizontal spine composed of vertebrae. Each one of them shows a worn out pillow on a floral mattress, bare, with no beddings at all. The fragments come together and between the pillow and the mattress an imaginary horizon stretches as if it were a panoramic view. A virtual chain of pillow mountains and a lake made of a blue shaded mattress. This row of photographs shows a repeated attempt at capturing a moment. An accumulated stutter. A not very successful attempt with a desired frame which never came through. The artist was left with a stack of used polaroids, of which not a single one is capable of being as lame as the artist wished to express. The stack itself on the other hand is helpful at reflecting a wider issue - an unbearable imperfection which leads to silence and incapability. Alongside, in the gloomy bubble created by Vugman, a mountain is suspended. A single image from an old video shot by the artist’s father. She stood in front of it in her childhood, and that mountain remained in her memory, the sensory and the photographic, as the distant mountain she can always come back to. Out of dozens of tapes, capturing her childhood but also capturing the presence and responsibility of the role of the cinematographer-father, she chose this mountain peak. Somewhere to aspire to. It snowed twice on that ridge - the first were the layers of swiss snow and then the visual snow contributed by the video camera. “My mountain happens to be from ‘94” Vugman tells me, indicating that every individual has their own mountain, to whom it symbolizes an object of challenge and success. She chooses to deconstruct the medium, downgrading its brilliance to pale shades of grey in cheap print, and yet to her - it’s one and it’s sublime.

The character of the father reappears in the video presented on the pedestal. A male figure, swimming. The pace is slow and concentrated. The film’s white noise diagonals puncture holes in the frame. The positioning of the camera leaves the water horizontal, like a stream seemingly confined in a pool. The character is heroic, and trapped. Coming up close to the work distorts the original medium, decomposing the video with an illusion of a leaking body. The arms seem to paddle through some kind of purple-brown colored batter. Leaning forward above the screen and above the character transforms the green shade of the body into the proper black and white. A father swimming, swimming in a loop, swimming young. Paddling as if striving to reach the summit of the mountain. Striving to reach some peak that is non-existent in the exhibition. This exhibition is exposed, revealing vulnerable situations. At the same time, it also points at the trust and and closeness in the relationships between the family members, between the subjects in front of the camera and the artist behind it. Vugman captures her parents, and even her own bed, in unflattering positions, some would say, but due to the proximity and the trust presented in them, they evoke serenity, beauty, and thoughtfulness. The intimacy and sharing of family situations, as well as the manner of approaching issues are all prominent in the gallery. For the sake of the exhibition this is not a specific family but a model of one - a mother, a father, a baby. A tense, prepared mother, even if somewhat introverted. A father swimming, filming and documenting, recovering. The baby remains a baby laying in his crib. Although silent, the resemblance in form to the uvula or a clitoris provokes a scream in the mind of the beholder. A peak to reach, a pillow-and-mattress horizon. The entire exhibition facilitates anticlimatic situations and a space of zero glory or splendor. Staying in it is both cradling and disturbing at the same time, fluctuating between moments of uplifting and moments of descent. A very exposed place to allow old memories that are always with you to arise. Memories of no crucial moments nor significant punchlines, and they wrap around you as you face them time and time again. There is no climax, and therefore there is also nowhere to fall from. throughout the exhibition careful attention is paid to the position of the viewer’s body. Different inclinations which are necessary for observation are indeed intentional, and enable a debate about the viewer’s responsibility to delve in, a parental responsibility perhaps. The artist wishes to say something, and wants you to listen, to contribute to the validation of her statement. And here she plays two roles - the responsible adult in charge of the situation she created and the door she opened, and also the child trying to say something and needs you to listen. That connection to your inner child, to childhood memories that have long been more than mere memories but a way of living, is an honest and exposed position. Those memories have molded into a hybrid of a suffocating hug and a calming comfort; an intuition sharpening silence and an ongrowing apathy. Vugman sets herself free and allows herself to declare her search. She digs back into her past and contemplates where she is aiming to get to. And then makes progress. She stutters doing it, and then studies that stutter too. She is the stuttering infant and also its creator. She is the one swimming to the mountain, yet to successfully reach it. She is the observer, overlooking everyone, including the sleeping parents. She is the one insisting, and also the one letting go. 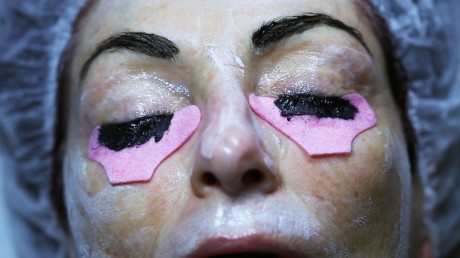 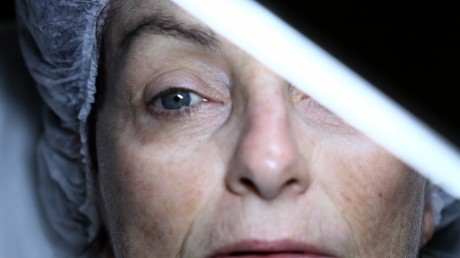 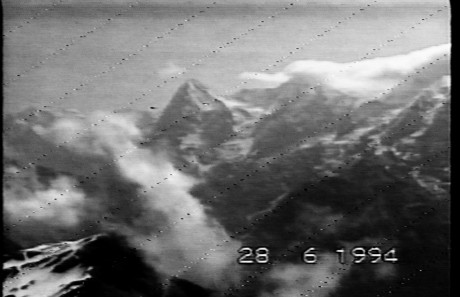 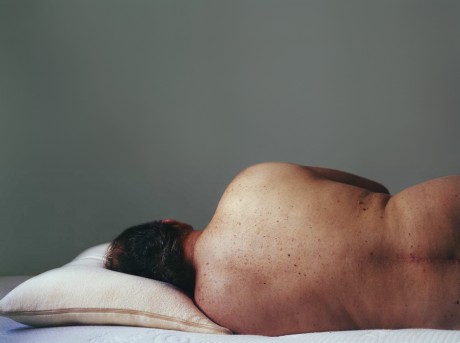