Miriam Naeh | In the Shade of the Palm

In the Shade of the Palm*/ Miriam Naeh

Where do we live?

In what ways do we define our sense of belonging to a given place?

How do we characterize our own habitat? In the formal ecological sense, habitat is defined as a set of environmental conditions that shape the life of an organism during its natural development. Driven by an instinct to survive, animals and humans alike adjust themselves to their environment, which in turn molds their development. But what is this inherent environment and what happens when we are torn apart from it? Can we keep calling our habitat ‘natural’ even while it includes things that are not of nature but made up of social processes, economic fluctuation, and industrial products that are completely synthetic? The artificial habitat that Miriam Naeh constructs in her exhibition attempts to create a platform for these types of investigations to take place.

At first glance it appears that what lies before us is a perfect and organic ecological environment: a thick forest of palm trees planted in an organized and deliberate fashion. And like any other constructed environment that exists primarily for the sake of its viewer, it is sprinkled with navigational signs and explanatory plaques, and provides pleasant opportunities for observing the common wildlife and surveilling the behaviors of the animals inside it.

Upon closer inspection, however, a different story unfolds. As we begin our walk inside, the forest’s formality quickly disintegrates and we discover that this so-called ‘habitat’ is neither coherent nor organic. The palm trees are from the Jordan valley, yet the ground on which they stand is made of green-colored linoleum found in the stores of south Tel Aviv. In fact, even the trees themselves, considered so native to this land, are not truly native at all: they were brought to Israel during the first half of the 20th century from different countries for various agricultural and decorative purposes. Over time a range of palm species took hold and became a recognizable part of the landscape.

The signs placed alongside the forest path attempt to delegate meaning and order to the place - but this is a failed attempt; they reveal no new information but rather present altered imagery of local palm trees from ancient Egypt. The video works that flicker through the forest expose the daily activities and rituals of white and furry-like creatures that supposedly live inside it. We get a sense that we are spying on something important, reminiscent of some rare footage taken from the nature and travel channels on TV. The creatures themselves seem completely incompatible with their environment. They live inside white camouflage suits made for snowy terrains. Stripped from their original objective, these white suits offer no camouflage capabilities in this thick green forest. Instead of helping the creatures assimilate into their environment, they only accentuate their strangeness inside this place.

This hybrid habitat that Naeh has created fulfills itself through the appropriation of incohesive elements, bringing them together as a sort of unstable botanical garden; an ecological heterotopia that may or may not survive the test of reality. The artificial hybridization of the environment creates a habitat that is so disjointed and fragmented it is no longer comfortable to call it 'natural'. Standing in the presence of this transitional space, it is hard not to wonder: is every environment, even our own ‘natural’ habitat, one that we actually create for ourselves? 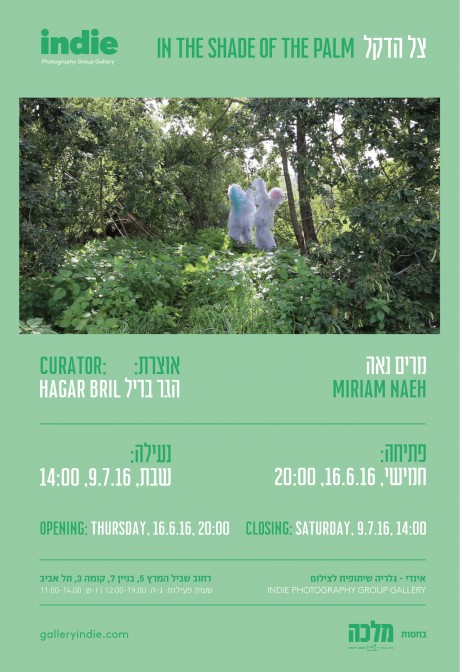 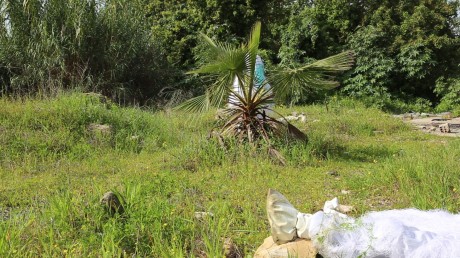 From the art installation "In the Shade of the Palm", video image, 2016 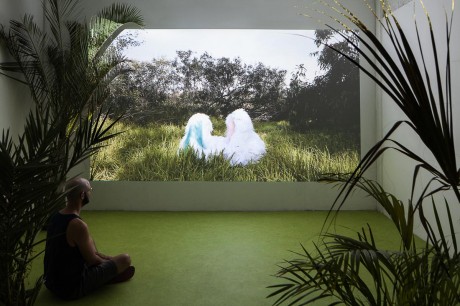 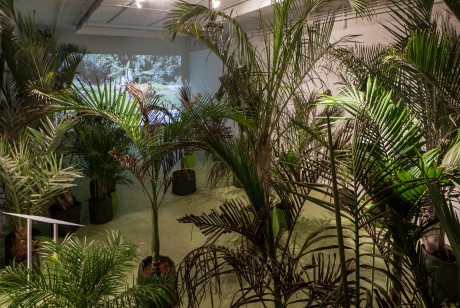